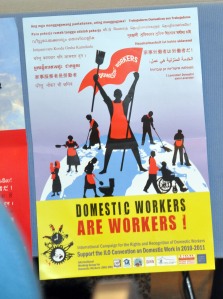 “This convention has been a dream of domestic workers” says Hessen El Sayah from Caritas Lebanon. Her excitement is shared by many representatives of labour organisations, domestic workers and migrant organisations heren in Geneva at the International Labour Conference (ILC). Late Tuesday night the convention that took decades in preparation has been adopted by the committee on domestic workers, inspring some delegates to celebrate in song and dance. It will set some minimum standards and, maybe most important, facilitates the recognition that domestic work is indeed work. But even when the added non-binding recommendations are agreed upon tonight or tomorrow and the whole instrument will be ratified by the plenary of the ILC next week, the next challenge awaits:

The ratification of the convention at the national level. I t needs a mere 2 ratifications from member states for the convention to become a treaty in international law (the employers wanted to raise this number to 18 but this will not apply to this convention anymore) but advocates hope that for example receiving countries of migrant domestic workers will ratify the convention as well.

Overall, the atmosphere seems less tense at this years deliberations – compared with 2010, when the employers group blatantly tried to slow down the process. Also countries like India which were opposed to a binding convention last year have come around – according to Sister Lissy Joseph from the National Domestic Workers Movement this has been due to a major lobby campaign by domestic workers on the national and state level.

Observers were more critical of the role of the EU, which they accused of trying to water down the instrument.

At a press conference today, Ellene Sana from the Center for Migrant Advocacy (CMA) elaborated on the benefit of such a convention for her advocacy work: “When fighting for migrant domestic workers we need the value of international laws, because the receiving countries have different laws. Their main frame is the nation-state, “we have to protect our citizens, not migrants. ” But for the convention to have more teeth, it would have to be  translated in national laws.

For background on the convention and the deliberations check out, among others,  these sites:

And here is a short comment I wrote on last year’s ILC: