UN Rapporteur: Irregular Migration is not a crime 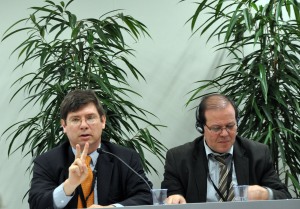 The plight of irregular migrants features fairly prominently on the agenda of this year’s GFMD. In three events on the issue, the recently appointed UN Special Rapporteur on the Human Rights of Migrants, François Crépeau , made it clear that irregular migration is not a crime: “We accept a treatment for irregular migrants we would never accept for our sons and daughters”. Regarding the rights that are bundled with citizenship,

Mr. Crépeau  (pictured above with Abdelhamid El Jamri, Chairperson of the UN Committee on Migrant Workers to the right) stated there are only two rights that might be considered exclusive for citizens of a country (and even that is debated): The right to vote and the right to enter and leave the country at will. These aside, “all human rights apply to everybody”.

François Crépeau  was part of a panel on “The Rights of Irregular Migrants – Engaging with the UN Human Rights Mechanisms” that was organized by the Office of the High Commissioner for Human Rights and the German Friedrich Ebert Foundation (FES). A similar event was held at the government meeting and the rapporteur also gave a keynote speech at the PGA.

François Crépeau  described how the division into nationals and foreigners is embedded in our thinking – “the foreigner is the absolute other”.  He stressed the necessity for this way of thinking to change – as well as the discourse on the criminalization of irregular migrants: “Crossing a border has never hurt anyone, it is not a crime against property or security”. He also spoke out against the practice of detention for irregular migrants: “There are only two reasons for preventive detainment – if somebody is a risk for the public or if there is a risk of flight.” But both cases rarely apply in the case of irregular migrants.

He also refused the common notion that irregular migrants pose a treat to the economy: “They are all employed, they do not die of hunger.” As an example he mentioned a district in his hometown in Montreal that is known for the production of T-Shirts. Obviously, this would not be thriving business if it would not rely on the labour of irregular migrants: “Everybody knows irregular migrants are employed there, but no one has an interest to denounce the situation – the least the MPs for the district, since this is employment.”

Certainy, changing the discourse on and perception of irregular migrants will not mmediately change their situation – but it will be an essential first step.

3 Responses to UN Rapporteur: Irregular Migration is not a crime