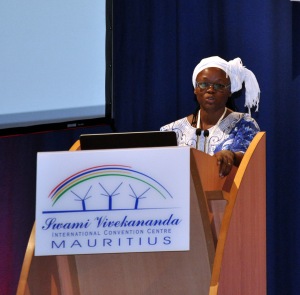 “I believe that after 6 years of talk the time has come to act” ; “Let’s get some change going”; “Whatever we recommend, we have to come up with strategies to implement it” – These calls for actions characterized the opening of the 6th GFMD Civil Society Days (CSDS). 140 delegates plus observers, representatives of international organisations and media have gathered in Mauritius for the last GFMD before the process takes a break for the UN High-Level Dialogue (HLD)  in 2013. One term came up repeatedly in the morning plenary session: Benchmarks!

John K. Bingham, Head of Policy of the organizing ICMC pointed out that “the GFMD is not an event but a process”.To build upon the outcomes from the previous meetings, no new issues were introduced in the 2012 Agenda – the goal is rather to “deepen the issues”. Among the roundtable topics that are being discussed are “Operationalizing a Rights-Based Approach to Labour Mobility, Markets and Matching” (which I am attending  right now), “Operationalizing the Protection of Migrants and their Families”and Human Development.

Thomas Stelzer, UN Assistant Secretary General, Department of Economic and Social Affairs United Nations (UN  DESA) stressed that very similar topics are envisioned for the HLD to be Held in September/October 2013, “so the results of your deliberations can feed seamlessly in next years’ meeting”.

Thus, a lot of work is awaiting the participants and the co-chairs Clariste Soh Moube from the Centre Amadou Hampata Ba (pictured) and George Joseph, a native Mauritian, now Director of the Migration department, Caritas Sweden.

The Meeting will also have to take into consideration the results of the independent assessment of the Civil Society participation in the GFMD, commissioned by the MacArthur Foundation (the main donor of the GFMD) and carried out by Social Impact. While the results of the assessment were not all that surprising for regular participants, the strengths and challenges were made quite clear:

– On the downside, many respondents complained that the GFMD lacked a clearly defined set of objectives; capacity building and access to governments were also considered to be have been succesful Will the 6th GFMD be able to address these shortcomings? This aspect will certainly be one of the Benchmarks to consider..

Senior Lecturer and Researcher at the Arnold-Bergstraesser-Institute at the University of Freiburg -- Freelance journalist -- You can find my CV at the links below:
View all posts by Dr. Stefan Rother →
This entry was posted in Gfmd, GFMD Civil Society Days, Migration and tagged civil society, development, domestic work, gfmd, global governance, ILO, migration, NGO, United States. Bookmark the permalink.