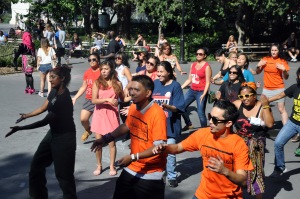 OK, I decided that will catch up with the Picture galeries of the various marches, pickets and, yes, flashmob, of the past days in chronological order. First of is the #3MW flashmob organized by the International Assembly of Migrants and Refugees (IAMR) on 2 October in Washington Square Park. While the Performance may not have been completely “N-Sync”, it was accompanied by a quiet catchy Migrant song. It was also preceeded by an IAMR4 press conference/ralley where several testimonials were given. As the announcement put it: “Immigrant youth activists Saul Arellano, son of Elvira Arellano, and Maria Peniche- Vargas of the Dream 9 will join domestic workers, caregivers, construction workers, seafarers, victims of human trafficking, refugees, and others from around the world in the IAMR 4 to share their stories and speak on the struggle for genuine immigration reform in the US under the Obama administration.”

Here is a Video link I came across: