Interview on the #GFMD in Sweden: “Limited civil society participation a huge missed opportunity for governments” 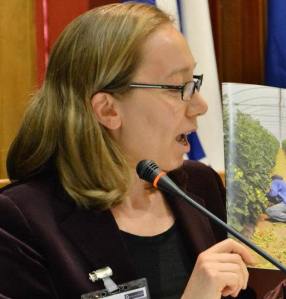 It is less than a month until the 7th Global Forum on Migration and Development (GFMD) will take place in Stockholm, Sweden. As reported on this blog, Amnesty International (AI) and the Global Alliance Against Traffic in Women (GAATW) have initiated a joint civil society letter to the Swedish Chair of GFMD, asking to increase the interaction between governments and civil society. I asked Francesca Pizzutelli, Researcher and Advisor in the AI Refugees and Migrants’ Rights Team about the motivation for the letter, the responses so far and the structural deficits of the current institutional framework for governing international migration.

Stefan Rother: How long have you been involved in/ following the GFMD process?

Francesca Pizzutelli: Amnesty International took part in the first GFMD, held in Belgium in July 2007, and has been following the process since. Already in 2007, we noted with disappointment the absence of human rights principles and standards on the GFMD agenda (see: Amnesty International’s contribution to the Global Forum on Migration and Development, Brussels 10 – 11 July 2007, Index: POL 33/003/2007, http://www.amnesty.org/en/library/info/POL33/003/2007/en). Despite some limited improvements, seven years later our concerns remain unchanged, as does our call to meaningfully include civil society and migrants themselves in the debate.

What was your motivation for the open letter?

During the years, we grew increasingly frustrated about the limits imposed to meaningful participation of civil society organizations in the GFMD. The Civil Society Days are an extremely vibrant and rich space for discussion; yet, it is a great challenge to reflect this multi-faceted discussion in the little time allowed for interaction between civil society and governments. The letter came from the realization that, before being able to engage governments on the substance, civil society needs to engage them on the procedure.

What were the reactions, how many people/organization have signed, did you receive a lot of feedback?

We received a lot of positive feedback, which confirmed that many other civil society organizations shared our concerns. The letter was an occasion to have a broad discussion about the current state of civil society participation in the GFMD and to clarify the direction for progress. In the end, 28 civil society organisations and individuals signed the letter, from the Americas, Asia, Africa and Europe.

I understand that you have already submitted the letter to the GFMD organizers – has there been a response?

Yes, we received a response from Ambassador Eva Åkerman Börje, Chair of the Sweden GFMD 2013-2014. As you know, the Swedish Chair has extended the time dedicated for the Common Space to four hours, which partially meets our request to extend it to at least two plenary sessions. However, the Swedish Chair rejected our call to allow civil society representatives to take part as observers in all plenary sessions, Roundtables, Working Groups and other GFMD meetings. It considered that this is a contentious issue and that, therefore, such decisions would be beyond the mandate of any given Chair-in-Office and would have to be addressed in the GFMD Troika and Steering Group before the issue could be discussed in the Friends of the Forum.

What are you expectations for this year’s GFMD – will it mark a new phase after the second HLD or rather be more of the same?

From the perspective of civil society participation, so far evolution has taken the form of a slow series of small steps, rather than dramatic turns from one phase into another. During the second HLD last October civil society organizations were allowed to be present as observers in all of the proceedings – which is still not the case in the GFMD. It is a huge missed opportunity for governments, as civil society organizations are key to provide and independent, evidence-based evaluation of government migration policies.

It seems to me that one obstacle to a consistent and meaningful civil society participation is the state-led nature of the GFMD – i.e. that the space provided to civil society very much depends on the hosting government. While Sweden has a comparatively good reputation in this regard, Turkey looks at the moment like a very difficult host (even though we might be able to tweet from the event after all…) What are your thoughts on this?

The informal nature of the GFMD seems to be a key obstacle. According to the response we received from the Swedish Chair, the problem would lie in the need to ensure broad diplomatic consensus within the GFMD. This is an aspect of a bigger problem, i.e. that the current institutional framework for governing international migration is inadequate for the fulfilment of the human rights of migrants, as it is fragmented and unable to address human rights issues in a coherent and effective manner. On the basis of these considerations, on the occasion of the HLD Amnesty International called for a broad review the current structures for the governance of international migration and the integration of human rights within them (see: Amnesty International’s recommendations on the occasion of the High-level Dialogue on International Migration and Development, Index Number: POL 33/002/2013, http://www.amnesty.org/en/library/info/POL33/002/2013/en).

I would like to thank Francesca Pizzutelli for finding time to answer my questions.

More info on the open letter can be found here: https://gfmd2010.wordpress.com/2014/03/10/gfmd-2014-civil-society-calls-for-meaningful-participation/

The picture of Francesca Pizzutelli was taken by Enrico Para, Camera dei Deputati.

1 Response to Interview on the #GFMD in Sweden: “Limited civil society participation a huge missed opportunity for governments”