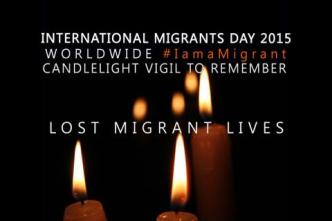 Today is International Migrants Day, marking the 25th anniversary of the adoption of the “International Convention on the Rights of All Migrant Workers and Members of their Families” by the General Assembly of the United Nations. But even with major campaigns initated by migrant civil society, the year leading up to the anniversary has seen only one further ratification by Madagascar. This brings the total number of parties to a mere 48, with no major receiving country in sight. As in the past years, I have compiled some resources and activities surrounding International Migrants Day:

Starting with the UN, there is a message from UN Secretary-General Ban Ki-moon’s, calling for “comprehensive and human-rights-based responses guided by international law and standards”. Besides these continuing calls, two main topics dominate the statement released today: The rising number of migrant deaths and the inclusion of migration in the UN Sustainable Development Goals. Referring to the first topic, Moon states that “2015 will be remembered as a year of human suffering and migrant tragedies” – regarding the second one he points out: “2015 was also a year in which the global community underscored the important contribution of migrants to sustainable development”.

The full statement can be found here:

And for the text of the convention:

To remember the refugees and migrants who have tragically lost their lives this year, the International Organisation for Migration (IOM) has invited the international community to “hold the first global Candlelight Vigil to commemorate the lives that have been lost or have disappeared while trying to reach safe harbour after arduous journeys across seas and deserts this year.”

More information can be found here:

On the occasion of this year’s International Migrants Day, the International Labor Organisation (LIO) has announced the winners of its global media competition entitled “Reporting Fairly on Labour Migration.” (By the way, thank you to several readers suggesting that I should take part in the competition, which I chose not to do)  Here are the very worthy winners:

The ILO has also published a new report in global estimates on migrant workers with special focus on migrant domestic workers. You can find this important resource here:

Migrant Forum in Asia has also released a statement on International Migrants Day, highlighting the “extraordinary contributions that migrants make to societies all over the world” and a reminder “not only of the extent of their contribution, but also of the enormity of the need to respect their dignity, rights, and freedom from discrimination and exploitation”. Here is the Statement:

An dhere is a statement from the Mekong Migration Network:

NOTE: If you have released a statement, organized an activity etc. relating to International Migrants Day, feel free to contact me, and I will include it in this post below here:

Here is an interview with Hildegard Hagemann from the Deutsche Kommission Justitia et Pax on the UN Migrant Worker Convention (in German):

And here is a Statement by the International Catholic Migration Commission (ICMC) :

Next: a Statement by U.S. Secretary of State John Kerry:

Irina Bokova, Director-General of UNESCO has issued a statement as well:

And this Statement was sent to me by the Transnational Migrant Platform (TMP):

The Statement Keep coming in, here is a collection of Global Unions statements for International Migrants Day and one by ILO

Senior Lecturer and Researcher at the Arnold-Bergstraesser-Institute at the University of Freiburg -- Freelance journalist -- You can find my CV at the links below:
View all posts by Dr. Stefan Rother →
This entry was posted in Gfmd, Migration, Uncategorized and tagged civil society, development, domestic work, global governance, human rights, ILO, Migrant worker, migration, NGO, UN migrant worker convention, United Nations. Bookmark the permalink.