Q & A with Peter Sutherland: “Bringing GFMD into UN would kill it” 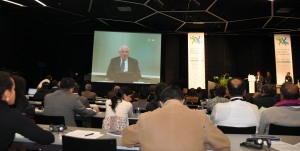 It was certainly not due to lack of asking. At a video-link session with the UN Special Representative for Migration Peter Sutherland, civil society representatives repeatedly questioned him about the chances of bringing the migration issue into the UN process. But Sutherland remained steadfast in his answers, which can be paraphrased as follows:

It does  not really matter whether he supports it or not, he does not see any realistic chance of a significantly wider UN involvement.

Why does civil society consider it so important to bring migration into the UN? They consider it a more formalized, democratic, binding process as opposed to the deliberately state-led GFMD.

But here is how Sutherland phrased his responses (quotes from my transcription, will check against the recording):

– (Regarding a larger role for ILO): “I do not believe it is possible to have a situation where GFMD is brought into the UN as a new organisation – it is not worth to put a lot of effort into it, it is not going to happen”

– “I do not take an ideological position; I just explain the current reality”

– “There is no point in me pretending to you that there is a more positive attitude towards a multilateral structure than there is”.

So that is as clear an answer as you could get. Sutherland also raised the question whether it would really be so beneficial to bring migration into the UN – considering that it then it would be “part of the normal UN business”. Instead, he suggested working with whatever structures currently exist. He also stressed the importance of civil society setting up its own structure in the process. He considered it also very important for civil society to organise itself on the national level and try to influence  their governments.

In his statement during the Civil Society Days and also at the concluding debate of the government meeting, where I am typing this right no, Sutherland was remarkably critical of the Global Migration Group (GMG) that just did not “deliver the goods”.

Sutherland stressed, that the policy area of migration is his “priority number one”. He sees the UN High-Level Dialogue on Migration at the UN as a vital moment, because it will set out the program for the 5 to 6 years to follow: “part of the program is likely to be a continuation of the forum. But at this stage it is an open agenda, so there are a lot of things we can do.” Regarding his own agenda, he announced an initiative he wants to propose on the situation of stranded migrants the urgency of this matter has become obvious in the case of Libya earlier this year.

Senior Lecturer and Researcher at the Arnold-Bergstraesser-Institute at the University of Freiburg -- Freelance journalist -- You can find my CV at the links below:
View all posts by Dr. Stefan Rother →
This entry was posted in Gfmd, GFMD Government Meeting, GFMD in General, Migration and tagged civil society, development, Geneva, gfmd, global governance, Government, Migrant worker, migration, NGO, UN migrant worker convention, United Nations. Bookmark the permalink.

1 Response to Q & A with Peter Sutherland: “Bringing GFMD into UN would kill it”